I got lucky that weekend. I went to the Meiji Shrine in Tôkyô and there was THE opportunity to make photos of cute and festivly dressed children. The Shichi-Go-San Kids. What is “Shichi-Go-San”? Let me quote from JapanVisitor:

November 15th is the Shichi-Go-San (“7-5-3”) Festival in Japan, celebrated as a gala day for three and five-year-old boys (or, in many areas, for five-year-old boys only) and three and seven-year-old girls. On this day, prayers are offered for the healthy and happy futures of the children. These ages in particular are celebrated both because the ages of three, five and seven are seen as important markers of stages in a child’s growth, and because odd numbers are seen as lucky in Japan. There’s a reason why shichi-go-san is celebrated on November 15th. Fifteen is the sum of three, five and seven, and is therefore also considered an especially auspicious number. Generally, in modern day celebrations of shichi-go-san, the children are dressed in their finest clothes, with girls often appearing in kimono and boys in hakama, going to their local Shinto shrine with their parents to pay homage to the tutelary deity of the neighborhood. There the parents give thanks for the health of the child and pray for continued happy and healthy futures.

Unfortunately, I had no good chances to capture boys in hakama… Girls were in the majority that day! :) 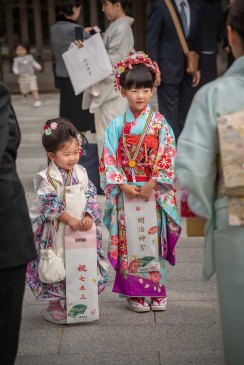 This site uses Akismet to reduce spam. Learn how your comment data is processed.

Planned and unplanned portraits of people all around the globe.

I am here too

All photos of this website are subject to copyright and without prior written authorisation by alexeyknphotos.com may neither be used, copied nor distributed.